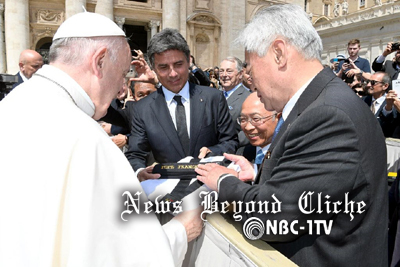 Athletica Vatican – Vatican Taekwondo was approved as the latest member of the taekwondo family via an electronic vote of the World Taekwondo General Assembly. World Taekwondo is only one of two International Federations with a Vatican sport entity among its membership.

World Taekwondo has a developed a close relationship with the Vatican in recent years through their shared commitment to promoting peace. The World Taekwondo Demonstration Team first performed in Vatican City in 2016 during the 1st Global Conference on Faith & Sport. In 2017, World Taekwondo President Chungwon Choue and the President of the Federazione Italiana Taekwondo (FITA) Angelo Cito were received by Pope Francis in Saint Peter’s Square in Vatican City and President Choue presented His Holiness with an honorary 10th dan black belt. The following year, World Taekwondo performed an historic demonstration in St Peter’s Square in front of in front of the Pope Francis and thousands of people gathered from all over the world for the Pope’s General Audience.

“We are delighted to welcome Athletica Vatican – Vatican Taekwondo to our global Taekwondo family. Taekwondo is a universal language, it does not matter what your religion or beliefs are; where you are from, or who you are; we are all united through taekwondo. With the Vatican, World Taekwondo shares many common values and we believe strongly in the power of sport to promote respect, friendship and peace. I am sure the creation of this new MNA will help further strengthen Taekwondo and its values around the world.”

Taekwondo courses have already been running in the Vatican with FITA having partnered with Saint Pius X Institute to organize a taekwondo course for the students of the seminary at the end of 2020. The course saw 20 boys aged between 13- and 17-years old practice taekwondo three times a week as part of their curriculum.

“By introducing Athletica Vaticana into the greater family of World Taekwondo, I hope we will be able to help others to connect the high ethical values of Taekwondo to a robust spiritual life, and strengthen the bridge between eastern and western cultural traditions. Together we can contribute to the common good of society, by spreading moral and physical strength, self-discipline, overcoming one’s limits, respect for others and joy of life, which are characteristics of Taekwondo.”

“Such recognition aims at encouraging the practice of Taekwondo as a sport among children and adults with a strong focus on inclusion of people with impairments and solidarity.”