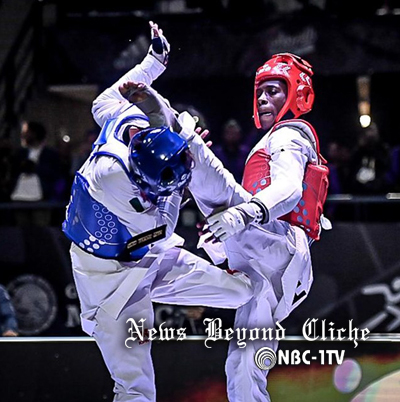 [By NBC-1TV K Y Yi] GUADALAJARA, Mexico (Nov. 19, 2022) – The Guadalajara 2022 World Taekwondo Championships crowned two new world champions today, from Serbia and Hungary.
On Day 6 of this seven-day tournament, the W-73kg and the M-54kg world titles were up for grabs in Guadalajara’s Centro Acuatico CODE Metropolitano. But before the action got underway, a special ceremony was held on the field of play.
It was “adios” from legendary Mexican fighter Maria “Fist of Fury” Espinoza. The triple Olympic medalist and former world champion received a special award to mark her retirement.
W-73kg
This weight class saw World Champion Da-bin Lee of Korea – who in her earlier fights looked relaxed, professional and very dangerous with her ax kick – defend her title against Nadica Bozanic of Serbia. 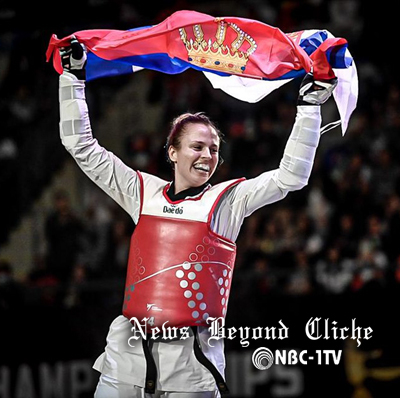 Lee has superb flexibility and she tried to land her ax kick from the get-go. But it was the Serbian, aiming more conservative kicks at the body, who started landing first going 3-1 up. The Korean spin kicked to the head and fell, in what would become a trend throughout the fight. Round 1 ended 12-7 to the Serbian challenger.
Round 2 started with head kicks flying before Lee landed and put two points on the board, drawing ahead. But the Serbian settled down and was firing more accurate kicks drawing ahead, 4-3. From then on, the final outcome was not in doubt. It ended 9-3 to Bozanic - yet another master performance by Team Serbia against a very, very high quality opponent.
Bronzes were won by Crystal Weekes of Puerto Rico and Rebecca McGowan of Great Britain. 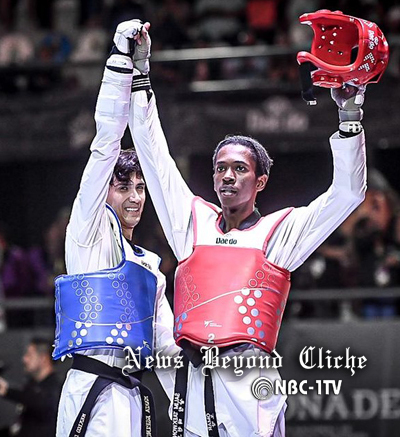 M-54kg
The final in this category saw hometown hero Cesar Rodriguez take on Omar Salim of Hungary. Rodriguez is a fighter’s fighter, boasting endless stamina and a firework display of technique. But he had fought an ultra-tough battle in the semis against Korea’s Jun-seo Bae, that must have sapped his energy. Salim is a stylish proponent of flamboyant technique, who had had an easier fight in the semis.
Round 1 started fast. Salim has a world-class punch, which opened the scoring. Then the Hungarian enlisted his head kick - and with his target radar locked on, lit up the board with lightning techniques - and looked relaxed and stylish doing it: Talk about peaking at the final! Round one ended 14-3 to Salim. 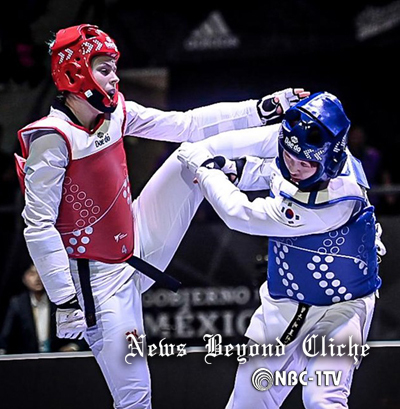 In the second, Salim opened fire with his long, high ax kick. His arsenal mixes punches and stabbing side kicks, with close-in round kicks and an arcing ax kick fired from a loose, low stance. Rodriguez seemed unable to get into gear, or to penetrate Salim’s defense. Comfortably ahead on the board, Salim spent the last seconds retreating – and was penalized for it - but it ended 11-9 in Round 2. A brilliant win for the Hungarian.
In a nice WT family coincidence, Salim’s coach and father, Gergely, had won the world title at Athens in 1991 at 19 - the same age his son grabbed gold in Guadalajara.
Bae – who had battled Rodriguez in possibly the most action-packed bout of these championships – and Po-yen Chen of Chinese Taipei won bronzes.
The seventh and final days of the 2022 World Taekwondo Championships falls tomorrow, with the M-58kg and the W-46kg.
By NBC-1TV K, Y Yi 의 전체기사 보기