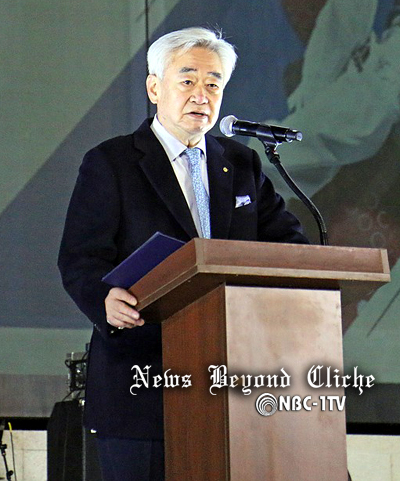 [By NBC-1TV K, Y Yi] SEOUL, Korea (November 22, 2021) - The World Taekwondo Peace Festival was held in Seoul, Korea on November 22, 2021 to celebrate the 20th anniversary of Olympic Taekwondo and the 40th anniversary of the UN International Day of Peace.
The event, which took place at the Seosomun Shrine History Museum, was jointly promoted by World Taekwondo (WT), GCS International and the U.N. Association of the Republic of Korea.
The peace festival, which lasted about 2 hours, featured a 20-minute Taekwondo performance by the WT Demonstration Team, an opening ceremony, and a one-hour peace concert.
The WT Demonstration Team showed the world that Taekwondo is for peace as they competed in the preliminary round of the ‘America’s Got Talent’ in April this year to receive a golden buzzer to reach up to the final round in September.
Shortly after the performance, there was an opening ceremony, in which WT President Choue delivered an opening speech, followed by congratulatory remarks by Vice Sport Minister Kim Jung -bae, former U.N. Secretary General Ban Ki-moon, U.N. Association-Korea President Lee Ho-jin. IOC President Thomas Bach also gave a congratulatory video message for the participants.
WT President Choue said in his opening remarks, “Since 2000, Taekwondo has featured in six consecutive Olympic Games. Throughout the past 21 years, Taekwondo has not only brought excitement to fans around the world; Taekwondo has also created a pathway for refugees, displaced persons, and the underprivileged to fulfil their sporting dreams. In Tokyo, we had four Taekwondo refugee athletes competing for the very first time in the Olympic and Paralympic Games.”
Dr. Choue, who also serves as president GCS International since 2006, continued to say, “Taekwondo is a sport that gives hope to those who dream of being champions. In total, we have 41 countries that have medaled in Taekwondo at the Olympic and Paralympic Games, making it one of the fairest sports in terms of medal distribution.”
“My philosophy, which was passed down from my late father, Dr. Choue Young Seek, who was the inspiration behind the creation of the U.N. International Day of Peace, is that ‘Peace is More Precious than triumph,” he said. “I sometimes wish that there is no such things as an U.N. International Day of Peace, because we should all live in a peaceful world every day. Unfortunately, there is no such utopian world. Therefore, the commemoration of the 40th U.N. International Day of Peace this year is a reminder that we, as global leaders, have a role to play in nurturing generations to live in harmony and respect. In a world of peace.”
Former U.N. Secretary General Ban said in his congratulatory speech, “I remember Dr. Young Seek Choue fondly as a man of vision and insight. At that time, I was serving as director for the U.N. Affairs Division of the Foreign Ministry and involved in the process of proclaiming International Peace Day. Looking back, it was Dr. Choue who initiated the very idea of International Day of Peace.” “Through close cooperation with then-Costa Rican President Rodrigo Carazo Odio, the U.N. General Assembly adopted its landmark resolution in 1981 to designate every Tuesday of September as the International Day of Peace, which was changed to September 21. Since Korea was not a yet a full U.N. member state, Dr. Young Seek Choue’s role was to work behind the scenes by persuading President Carazo Odio of his idea.”
In his congratulatory video message, IOC President Bach said, “Today’s festival is more than celebrating the long history of Taekwondo as an Olympic sport. Today you are putting the spotlight on the unique power of sport to unite the entire world in peace.” “Peace, this was also central to the thinking of the founder of the IOC, Pierre de Coubertin. When he revived the Olympic Games 127 years ago, he saw them as a way to promote peace among nations and peoples,” the IOC President said. “This is why I would like to thank World Taekwondo under the great leadership of your president Choue for organizing this festival that celebrates sport, peace and solidarity.”
The peace concert featured eight songs. Mezzo-soprano Paik Nam-ok performed “Song of Peace,” Then the Korean Soul, a famous Korean black gospel group, performed “Oh Happy Day,” followed by “Yo Soy Maria” by the Jazz Quartet. Band Leenalchi, a seven-member band, performed “Tiger is Coming” and “Please Don’t Go.” The Korean Adopted Children Choir performed “Magnolia Blossom,” which was written by GCS founder Young Seek Choue and composed by Kim Dong-jin, and John Lennon’s “Imagine.”
By K, Y Yi 의 전체기사 보기