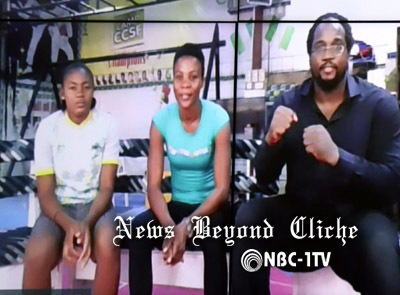 The journey took seven days as they travelled from their homes in Nigeria, which are more than 200km from the capital of Abuja. The pair met in Lagos on 25 June before travelling through Benin, Togo, Burkina Faso and Mali to get to Senegal, during which time they had to change buses numerous times in each country. They encountered many challenges along the way and faced a hard time when passing through check points, but remained committed to getting to Dakar.

The difficult moments were interspersed with enjoyable ones as they were able to cross the beautiful African continent and see many wild animals in their natural habitats.

Upon arriving in Dakar, the athletes were tired and their feet were swollen but nothing could stop them from competing. They arrived just in time for the competition weigh-in.

While the athletes did not win any medals at the Championships, their dedication to Taekwondo caught the attention of World Taekwondo President Chungwon Choue who was so impressed that World Taekwondo paid for the athletes’ flights back to Nigeria for safer return this time.

President Choue arranged to speak with the athletes once they had returned to Nigeria. Speaking during the video call, President Choue praised the two women for their Taekwondo spirit in overcoming challenges. He also encouraged them to use Taekwondo to promote social development and referenced the inspiring story of Natsiraishe Maritsa in Zimbabwe.

The President reiterated that World Taekwondo can help support in providing equipment aid if the athletes make a request.

Otuadinma and Juliet’s story is an inspiring one that reminds us all that often barriers to success can be overcome if we have the determination and drive to succeed.